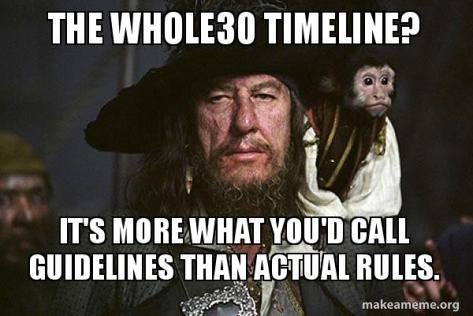 Well, it’s the start of Whole5, and  I’m still on track.  Thing is, my Whole30 Timeline experience is syncing up, um, in almost no way.

I read and re-read the timeline numerous times before starting Whole30, and many more again since.  I obviously expected and planned for some variation, and I’d say my days 1-3 were more or less in keeping with the timeline (What’s the Big Deal? and The Hangover), although the 3 days combined were more like a hybrid of the two phases merged into one.  Since I’d mostly been eating clean already, the only sign of detox I had was a daily headache, which I’ve concluded is caffeine withdrawal from kicking coffee completely rather than from Whole30, although I’m not a scientist or a doctor, so will concede that it could be a factor.  I’ve mostly been a little nonchalant and waiting for the other shoe to drop.

On Saturday (day 3), I was watching a live show in a theater and suddenly started sneezing in a way I recognized as not allergies.  Over the course of the rest of the day, I became draggier and felt my nose and ears clogging.  By the time I got home at 11:00 PM, it felt like a full-on cold, complete with a sporadic wet cough.  Thanks to the congestion, I got my sleep in small increments that night and finally got out of bed yesterday morning feeling unrested.  I puttered around the house the rest of the day, canceling my Sunday plans and not even making it to the grocery store, let alone the gym.  I crawled back into bed around 4 in the afternoon and napped off and on, then got up around 7 to eat dinner, and got right back into bed as soon as my last dish hit the drying rack.  I slept even less last night, and the crap I’m coughing up has gotten more… non-nondescript.  I guess I’m officially sick, although certain sources on the web suggest this is a bodily reaction to the detox (which was my guess/hope) rather than a proper cold.  (The Whole30 website categorically rules out this possibility.)  I so rarely succumb to any type of illness that I’m always ready to attribute symptoms like this to something else.  Maybe it’s a coincidence, maybe it’s the detox, or maybe it’s some cruel joke of a joint effort of the two.  In any event, it’s fucking annoying to be getting even less sleep!

Here on day 5, I have to say I’m really not feeling the bloodlust that the timeline’s Kill All the Things phase portends (even in spite of the sleep deprivation).  I’m more in the I Just Want a Nap phase, which I’ve been in since before starting Whole30.  Haha.  I’ve been having food dreams again, which is characteristic of a later phase as well as something that happens to me anyway, but I have no cravings or desires to murder anyone.  I haven’t had another headache since Saturday, so The Hangover feels safely over.  Staying off the scale has been the true test of willpower so far.  I’m a bit incredulous about the effectiveness of this program right now, which is mostly because I’ve been so tethered to the scale as THE metric of results and I haven’t weighed myself since before I started this whole endeavor, and since right now, I feel markedly worse, not better.  I have no temptation to quit, though.

DISCLAIMER:  If I’m making Whole30 sound easy, don’t be fooled.  A lot of work goes into this in terms of planning and meal preparation, not to mention real-time adjustments.  (I did great on my day away from home all day Saturday!)  I was also already eating clean before starting this, so it wasn’t too much of a shock to my system to cut out the alcohol I wasn’t consuming, the grains I was eating in moderation, the added sugar I was restricting, the legumes I enjoy but scarcely eat, or the dairy I took nearly exclusively in the form of milk or cheese, nearly exclusively in the early part of the day.  Also, it is only day 5; that’s not enough time for any kind of thorough analysis of anything, especially not a drastic dietary modification.  That said, the scientific part of my brain is curious and eager to see how the full effects will bear out.  This detox flu/head cold needs to GTFO, though.

In the meantime, however, I can’t plot myself on the Whole30 Timeline.  I’m traveling without a guide, I guess.

Off the edge of the map, mate.  Here there be monsters. 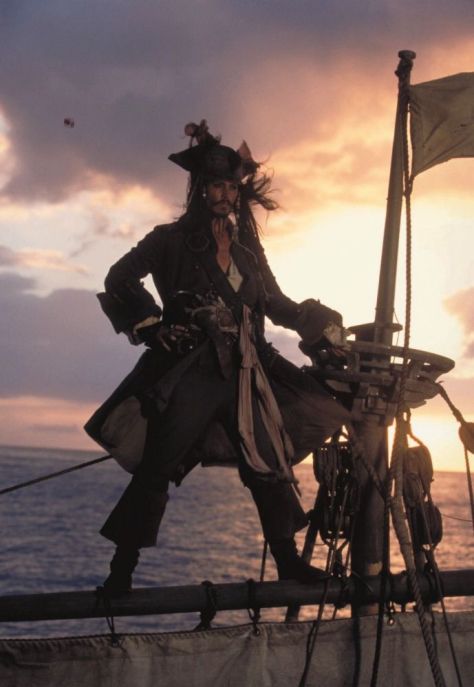