Welp, today was a day I’ve spent the past several weeks being somewhere on the spectrum between not looking forward to and dreading:  my first mole screening.

Moles, moles, moles.  I’ve got more moles than a bad cop show.  Of course, I grew up with my mom putting her loving spin on the terminology and calling them “beauty marks.”  Unfortunately, naming them something else doesn’t exempt you from potential associated health risks.

I wasn’t uncomfortable about this visit to my dermatologist because there’s anything alarming with any of my “beauty marks.”  It was the exam I wasn’t down with.  You have to lie on a table wearing one of those awful open-in-the-front paper robes with nothin’ but your skivvies and bra on underneath, while the doctor examines your skin inch-by-inch while he’s wearing all of his clothes, plus magnifying glasses.

I’d rather do almost anything else.

Except have skin cancer.

So, I did the screening.

Shockingly, it wasn’t so bad!  I mean, sure, I felt like a lab specimen, but that’s true of most doctor’s visits for me.  Everything is clear and my doctor isn’t worried about any of my moles.  So, that’s one unpleasant visit over and done.

The further good news?  I realized that life below 200 pounds means that those stupid examination robes actually stay closed around your body if you don’t want to let it all hang out.  I also learned that your heart doesn’t race with embarrassment the whole time the doctor is looking at the parts of your body you wish you could trade in for better models.  At the end of the visit, you get to leave with your dignity, and you don’t even feel like crying.  It’s miraculous.

Oh, and I’ll throw in a little milestone from last night:

P.S.  That’s not a mole on my foot, it’s a cut from breaking in some new boots that also broke in me.

Can you guess what that is around my ankle?

No, it’s not a house-arrest bracelet monitor.

It’s the large VivoFit band that used to fit my wrist, pictured halfway down my arm here in December: 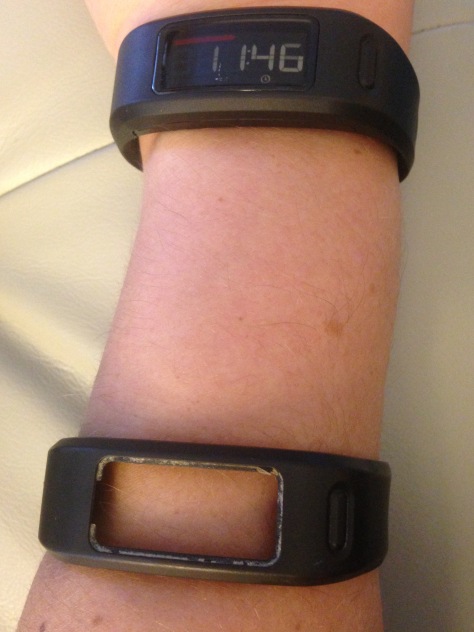 I’m too jazzed to expend mental energy putting an elegant little bow on all of that.  But you can see a bunch of my moles in that picture of my arm, so it ties together.  And maybe I’ll go watch a bad cop show for good measure.