I had two BFD-NSVs at the gym today:

Something kind of weird/cool linked my workouts tonight.  First of all, it’s worth noting that they almost didn’t happen; I let myself fall victim to gymtimidation more often than I should.  Tonight, there was a row of skinny girls casually using the ellipticals while flipping through fashion magazines and not breaking a sweat, all without headphones in.  I might have immediately abandoned my plans for the elliptical tonight had the ONE that was still available not been one with the moving handlebars.  I told myself, “You know what?  Let’s show these pretty girls what a real workout looks like.”

They were gone 5 minutes later.

Then, of course, a headphoneless DUDE got on the machine RIGHT BESIDE ME and started his work-out.  I started feeling self-conscious again, but then I thought, “Oh, you wanna get all up next to me while I’m working here?  OK, fella.  I’m gonna outlast you.”

In the last 2 minutes of my run, which were the most intense because I had decided to break my previous PB at that point, another pretty girl hopped on beside me.  This time, I grinned smugly to my sweaty reflection in the machine and amped my legs into overdrive.  At the end of the workout, all self-consciousness was gone.  When I saw 3.21 on the display, I raised my arms in the air in a victory pose.  I didn’t even notice if anyone looked at me funny for doing that.

Right after that, I grabbed a treadmill all the way against the wall, with one person directly in front of me doing her own run.  I noticed 2 minutes into my jog that that person was raising her arms in a victory pose every 60 seconds.  Oddly, that helped me keep going.

Oh, and the patron saint of women was watching me the whole time from the tray on my treadmill: 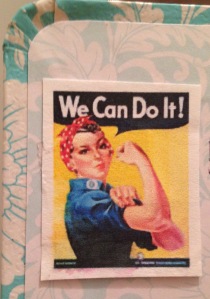 Someone had left a Rosie the Riveter sticker behind — with the backing still covering the adhesive portion.  After my successful jog, I stuck it in the front cover of my exercise log book (pictured).

Let’s lose some more weight, shall we?